Prospective buyers of digital mammography equipment got a warning at the 2005 RSNA meeting: Watch out when comparing images from equipment made by different vendors.

Prospective buyers of digital mammography equipment got a warning at the 2005 RSNA meeting: Watch out when comparing images from equipment made by different vendors.

The warning comes on the heels of favorable findings from the Digital Mammographic Imaging Screening Trial that is helping generate demand for an already popular technology. The users of this equipment, however, including lead DMIST investigator Dr. Etta Pisano, said radiologists who go looking for the benefits of digital mammography may be in for a rude awakening when they encounter interoperability problems.

"We have had the honeymoon period with digital mammography, and we are about to have the real work period. This will affect everyday radiologists - not just academic geeks like us," said Pisano, chief of breast imaging at the University of North Carolina in Chapel Hill.

"When rank-and-file radiologists put these systems into their practices, these problems will rear their ugly heads," Pisano said.

The working group gathered vendors, breast imaging specialists, and regulatory officials at the RSNA meeting to stress the urgent need for interoperability. Vendors must speed up their work on this issue to avoid major problems that will be exacerbated with mainstream use, speakers said.

Image display varies greatly depending on the vendor. Comparing mammograms of the same patient can be difficult and time-consuming if the images were taken on different systems, according to Dr. Margarita Zuley, who represented the working group at the RSNA meeting.

Prospective buyers are probably unaware of these potential problems and will discover them when they start to use the digital systems, said Zuley, a radiologist at Elizabeth Wende Breast Clinic in Rochester, NY.

"Patients move around, and we are incredibly dependent on prior images. If prior images were taken on the equipment of a different vendor, we may not be able to read them," Zuley said. "With the number of machines (coming into use) and cross-platform incompatibilities, we will have lot of unhappy people at the RSNA next year."

The IHE mammography working group has drafted a list of issues that need to be addressed immediately, Zuley said. This list will be published for comment soon and finalized by May. The group wants industry to work on the draft list now, ahead of finalization, and to demonstrate progress on these issues to the radiology community at a meeting planned for April at Stanford University.

Digital mammography system vendors in the audience said they believed the timetable was too short and some requested more time. Some also were reluctant to participate in a demonstration of systems to users in April, believing that such an event would pit vendors against each other unnecessarily.

Group members were adamant, however, that there is no time to spare, given the escalating demand for digital mammography systems. Their opinion regarding the need for quick industry response was bolstered by Priscilla Butler, senior director of the American College of Radiology's breast imaging accreditation program.

"We strongly support this (initiative), given the difficulty of connecting systems," she said. "We encourage everyone to move forward as quickly as possible."

Changing and Maturing Perspectives on AI 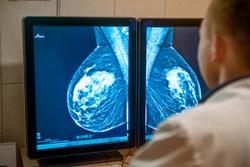