Finding the female stars in a male-dominated field.

This month, RADxx, the year-old, 100-member community dedicated to growing the number of women in imaging, is going a step further to highlight women and their supporters in radiology.

At this year’s RSNA, RADxx will announce the winners of its inaugural RADxx awards. This program is aimed at honoring women in imaging informatics, heralding their contributions to the field and encouraging more women to follow the same path.

The awards program coincides with a milestone for women in medical education. As of November 2016, according to the Association of American Medical Colleges, 10,474 women enrolled in medical school. They account for 49.8% of students working to become physicians.

But, the story for radiology isn’t quite the same. Based on a 2015 ACR study, radiology is only 27% female. And, the numbers are even smaller in imaging informatics.

It’s that reality that makes RADxx and its awards program so vital, said Geraldine McGinty, MD, RADxx co-founder and vice chair of the ACR Board of Chancellors.

“It’s important to catch people in different venues - to catch them where they are,” she said. “Imaging informatics is an important area because radiology already has a lot of work to do with diversity, but informatics is even less diverse.”

Individuals, from high school through medical school and beyond, should be able to look at radiology and see it as a specialty that embraces and celebrates excellence and diversity, she said.

By recognizing women who have actively contributed to the advancement of imaging informatics, RADxx hopes to bolster its community and grow the next generation of female imaging informatics leaders.  The group also wants to help build relationships and mentorship opportunities between practicing professionals and those who will, one day, enter the field.

Hopefully, said Mini Peiris, RADxx co-founder and chief marketing officer for Ambra Health, many of these mentor-mentee relationships will expand to become sponsorships - partnerships that take a rubber-meets-road approach to boosting careers.

“A mentor helps and guides you, but a sponsor gets you in the room and makes you part of the conversation,” she said. “They recommend that you speak, and participate in committees. They elevate you in ways that you move beyond doors that you didn’t even know had been closed to you.”

Making quality leadership and guidance available is paramount, she said, because imaging informatics is a fast-paced field. As more developments with artificial intelligence and the cloud emerge, early-career professionals will benefit from supervision and direction offered by mid- and late-career providers.

All RADxx award submissions must be received by Nov. 10, 2017. Physicians, administrators, or information technology professionals are welcome to apply. RADxx is accepting award nominations for three categories:

1. Trailblazer: Applicants must have at least 10 years experience and hold (or have recently held) a leadership role in radiology, medical imaging, administration, information technology, or operations.

2. Advocate: Applicants for the Advocate award can be either men or women. They must have contributed to the advancement of a woman’s career in imaging informatics by assisting in her promotion, encouraging her to enter the field, assigning her to a high-profile project, helping her attain research funding, or supporting her in gaining tenure.

Nominees could also have helped raise awareness of imaging informatics through their own speaking engagements, social media activities, or thought leadership publications.

3. Rising Star: These applicants must have fewer than 10 years experience as imaging operations professionals and be a resident, fellow, or junior faculty member. The successful applicant will demonstrate an impact on the evolving imaging informatics field through modern practices and will actively raise awareness of the field through speaking engagements, social media, and leadership content.

The Rising Star awardee will also receive a $2,000 travel grant to the 2018 Society for Imaging Informatics in Medicine annual meeting in Maryland from May 31-June 2. RADxx officials will also pair the winner with a mid-career mentor.

Ultimately, RADxx wants to create an ever-growing population of female trailblazers in radiology and imaging informatics. Women often think creatively and have an outside-the-box approach to health care, Peiris said, and if RADxx can expand the cadre of qualified female providers, the benefits to patient care will be significant.

“Diversity among health care providers leads to better patient care overall,” she said. “If people are able to recognize themselves in their providers, then they’re more comfortable. They’re more likely to have a better experience.” 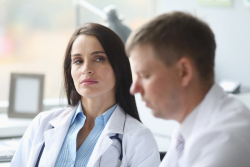