Throughout the COVID-19 pandemic, diagnostic imaging has been used to manage and monitor the progression of pneumonia associated with the virus. New evidence gathered with contrast-enhanced lung ultrasound, however, now shows patients exhibit patterns in the lung that are not typically found with pneumonia.

Citing three cases with male patients, Italian researchers, led by Gino Soldati, M.D., from the diagnostic and interventional ultrasound unit at Valle del Serchio General Hospital in Lucca, Italy, revealed COVID-19 can produce unanticipated findings. The men, who had pneumonia-like symptoms and were admitted after receiving a positive diagnosis confirmed by the laboratory, underwent contrast-enhanced ultrasound scans. The images highlighted lung perfusion defects in a pattern not typically found with pneumonia or lung collapse.

The team published their findings in the May 12 issue of the Journal of Ultrasound in Medicine.

“Our findings may have importance in the pathogenetic interpretation of the consolidations in COVID-19 and, consequently, in the ventilatory and medical treatments of patients with COVID-19,” the team wrote.

According to the team, within three hours of admission to the hospital all three patients received both X-ray and ultrasound scans. X-ray images showed consolidative abnormalities, typical with COVID-19 infection, and ultrasound findings showed B-lines that were frequently grouped and confluent in white lung areas with a patchy appearance. All patients had echographic parenchymal consolidations at the bases and more than one nonbasal subpleural consolidation that was less than 2 cm in diameter with a wedge-shaped or angular appearance.

Due to the subpleural consolidations, as well as D-dimer values and not being able to perform a chest CT, the investigators conducted contrast-enhanced ultrasound scans. Based on those images, the team discovered:

The authors noted that even though some of the features of COVID-19 did resemble findings typically associated with viral pneumonia, several aspects of the lung involvement cast doubt on the actual nature of the consolidative lesions. They posited that the lung damage revealed could be caused by inflammation from pro-inflammatory macrophages, granulocytes, and cytokines.

All patients were released from the hospital within 10-to-12 days, never having needed invasive respiratory support. The team acknowledged additional investigations are required, but that doctors could use contrast-enhanced ultrasound scans to alter their treatment plans with COVID-19 patients where appropriate, including potentially implementing immunomodulatory therapy for the cytokine storm.

“Our and other observations suggest that there also may be an ulterior pattern of COVID-19 lung involvement in which the consolidations do not represent atelectasis or easily recruitable areas by tissue with large perfusion defects,” the team wrote. “This possibility could be important for managing the ventilatory support of patients with respiratory failure.” 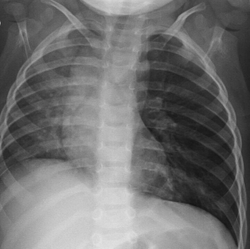 Cardiac CT and MRI Use Are Up, But Still Lagging Behind Other Heart Studies