Big-ticket items are suffering this year as reimbursement cuts resulting from the Deficit Reduction Act have had a wider and longer lasting effect than initially expected. Particularly hard hit has been PET/CT. The hybrid juggernaut had defied the odds for several years, marching forward with ever higher sales despite utilization rates at individual sites that allowed plenty of unused capacity.

Big-ticket items are suffering this year as reimbursement cuts resulting from the Deficit Reduction Act have had a wider and longer lasting effect than initially expected. Particularly hard hit has been PET/CT. The hybrid juggernaut had defied the odds for several years, marching forward with ever higher sales despite utilization rates at individual sites that allowed plenty of unused capacity.

Cutbacks in spending by outpatient centers, precipitated by the DRA, have turned this once high-flying market on its ear, as up to 70% of PET/CT scanners were being sold to outpatient clinics, according to industry sources. Other big-ticket items, CT and MR, have taken a hit in the U.S. as well.

Some radiology equipment, however, has proven virtually bulletproof. Ultrasound and radiography are staples of medical imaging and, consequently, have lost the least in the wake of this federal initiative. Ultrasound has seen little effect, while x-ray has been rising on the wings of digital imaging.

Digital mammography continues to boom, increasingly attracting customers placing multiple unit orders. Growth in vascular imaging, composed of x-ray angiography and cardiac cath, has stayed about steady, due largely to positive fallout from the early adoption of 64-slice CT as a diagnostic aid for coronary blockage and the consequent specialization of cardiac cath as a therapeutic modality.

But the hands-down winner in this environment has been networking technology, namely PACS, which is seen as a way of improving efficiency. Many of the gains are being found in the outpatient arena. Hit squarely by cutbacks in reimbursements, diagnostic imaging centers are looking for ways to increase efficiency so as to do more exams in the same period of time and with the same labor pool.

Industry-compiled numbers tell a mixed, though decidedly negative, story for the majority of these products. In 2006, revenues from the shipment of MR scanners to U.S. customers dropped about $80 million compared with 2005, falling from well over $1.3 billion to well under that mark. This fall has continued just as demand for CT scanners in the U.S. has dried up, despite this modality coming off its best year ever, tallying $1.75 billion in systems shipped to U.S. customers in 2006 (DI SCAN, July 6, 2007, CT joins MR in market slide as demand ebbs).

In 2006, PET/CT took a massive hit, nosediving to $380 million in revenue from units shipped to U.S. customers from its 2005 record height of $740 million. This year will be similarly unpleasant for vendors, who are predicting a continued strong downdraft from the DRA. The other side of nuclear medicine, sales of gamma cameras, will do nothing to offset the losses. These systems have been commoditized for about a decade and, consequently, will continue to see moderate demand, at best, with soft pricing.

The market for vascular products - cardiac and angio systems - slipped in 2006 to about 850 units compared with about 940 the year before and 800 in 2004. Revenues edged upward, however, to near $970 million compared with $950 million in 2005 and $800 million in 2004, a rise attributed to the almost complete changeover to flat-panel digital detectors from the mainstay image intensifiers.

In 2006, PACS equipment sales leaped by some 30%, according to key vendors who have benchmarked sales of large competitors and themselves. This follows a relatively flat or declining market in the three years earlier.

Because of the many companies offering PACS, vendors can do little more than follow trends, estimating growth or decline. Equipment sales reflect just one aspect of PACS/IT, as service models are beginning to take hold, skewing numbers through per-click or per-study payment schemes. Further complicating matters is the offering by vendors of hybrid business models in which some sites buy equipment but contract with vendors for specific services otherwise performed by in-house IT personnel.

Some insight into emerging opportunities in this market comes from following public companies such as Merge and Emageon, which have begun emphasizing the sale of PACS tailored for imaging centers and community hospitals. Vendors agree that this segment of the market represents much of the unsatisfied need for PACS.

Both companies are scheduled to present quarterly results next week. 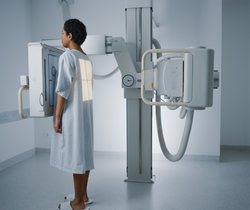