The Bach model, PLCOM2012, LCRAT, and LCDRAT most accurately predict risk and performed best in selecting ever-smokers for screening.

Four of the nine currently used lung cancer risk models perform best in screening ever-smokers, according to a study published in the Annals of Internal Medicine.

Researchers from the United States and Australia sought to compare the U.S. screening populations selected by nine lung cancer risk models and their predictive performance in two cohorts. The models were:

The results showed that at a five-year risk threshold of 2 percent, the models chose U.S. screening populations ranging from 7.6 million to 26 million ever-smokers. The four models that had the best overall calibration and areas under the curve were the Bach model, PLCOM2012, LCRAT, and LCDRAT. They were well-calibrated (expected–observed ratio range, 0.92 to 1.12) and had higher AUCs (range, 0.75 to 0.79) than the five other models that generally overestimated risk (expected–observed ratio range, 0.83 to 3.69) and had lower AUCs (range, 0.62 to 0.75).

“The four best-performing models also had the highest sensitivity at a fixed specificity (and vice versa) and similar discrimination at a fixed risk threshold,” the authors wrote. “These models showed better agreement on size of the screening population (7.6 million to 10.9 million) and achieved consensus on 73 percent of persons chosen.” 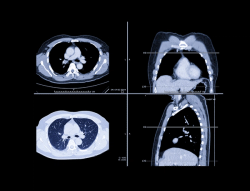