It's been a mere eight years since the blurry spots called ground glass opacities (GGOs) that appeared on spiral CTs were first linked to cancer. Already, the first hints are emerging of what they may actually mean to malignant transformation.

A millenium passed between the anatomy of Galen and the physiology of William Harvey. It's been a mere eight years since the blurry spots on spiral CT called ground glass opacities (GGOs) were linked to early lung cancer. Already, the first hints are emerging of what they may actually mean to malignant transformation.

Given the speed of progress in molecular science, it's reasonable to expect some clarity soon in the uncertainties surrounding GGOs that were listed by a team of Italian specialists in the European Respiratory Journal last year: How to distinguish benign, nonevolving GGOs from those associated with cancer, how to reach a definitive diagnosis in a reasonably short time, and whom and how to treat.

GGOs typify the dilemmas around the use of CT scans for lung cancer screening. Often measuring less than 5 mm in diameter, they appear as small regions that cloud, but do not obscure, underlying structures-ergo, they aren't solid masses. They don't necessarily represent cancer; GGOs also turn up in pneumonia, notably as part of swine flu or avian flu. But in the context of malignancy, do they indicate tiny emergent primaries, metastases caught in freeze-frame, or nothing worthy of concern? Is it worth removing part of a lung to eliminate a worrisome speck?

In a 2002 report in the Annals of Thoracic Surgery, doctors at the National Cancer Center of Japan described GGOs as “early peripheral lung cancer” and touted them as a presurgical prognostic indicator that can be either resected or just watched, depending on their size and growth rate. They called for prospective studies, but launched one only last year: a single-arm trial of limited resection for peripheral lung adenomas smaller than 2 cm.

Meanwhile, we still don't know how to distinguish malignant from innocuous GGOs on CT scans, and no good data are available about the risks of leaving them untreated. There may also be risks to resecting them. Another report last April from the Japanese National Cancer Center described three cases in which solid tumors developed afterwards at a site where mixed solid and GGO lesions had been resected.

Last month, researchers at Nagasaki University Hospital reported the results of their retrospective study of GGOs. Histological studies showed that of 74 pure focal (e.g., not mixed-type) GGOs, the majority (73%) were atypical adenomatous hyperplasia (AAH), not malignancies, and that most did not change size during nearly four years of follow-up. These data, the team said, justify dealing only with a solid primary and leaving any focal GGOs alone.

In GGOs, a glimpse of carcinogenesis

Yet in 2008 another team from Japan reported that the vast majority of GGOs that represent adenomas are positive for epidermal growth factor receptor (EGFR) mutations, while the majority of AAH are not. Of those that aren't mere hyperplasia, a Korean study of genotypes in multiple GGOs found that individual GGOs in the same lung had different EGFR and V-Ki-ras2 Kirsten rat sarcoma viral oncogene homolog (K-ras) genetic profiles. Hence, they must have arisen independent of each other, not as offshoots of the primary tumor.

The latest dispatch on the subject from the National Cancer Center of Japan, published in Carcinogenesis last month, identifies a specific genotype linked those GGOs that are AAH rather than carcinoma or adenoma. These tiny hyperplasias have mutations in the gene that encodes aromatase, the enzyme responsible for the final step in the biosynthesis of estrogen. Intriguingly, another recent study from the same institution found that women were more likely than men to show multiple small (2 to 5-mm) AAH lesions in the background of primary lung cancers on spiral CT, most of which were adenomas. The researchers feel they have evidence that hyperplasia proceeds to adenoma in these cases. But why so often in women?

Late last year, a team from Shanghai reported in Interactive and Cardiothoracic Surgery that GGOs found in women are more likely to be adenomas, and are less likely to develop metastasis, than those found in men. What, they inquired, is the role of estrogen?

While the miniscule lesions spied by CT have created a dilemma for thoracic surgeons, oncologists, and health economists, they seem also to have offered a new (if still cloudy) window into the carcinogenic process in the lung. Given a little more time, the evidence to help us know what to do about GGOs may be more solid than fuzzy. 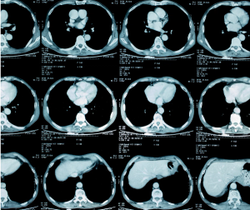