Combining DBT and synthetic mammography can mean less follow-up imaging for women with non-dense breasts – but not necessarily for women with dense tissue.

Women without dense breasts are less likely to be recalled for follow-up studies when their providers screen them with both digital breast tomosynthesis (DBT) and synthetic mammography (SM) rather than standard digital mammography (DM) alone, new research has revealed.

When radiologists pair the combined DBT+SM studies with automated breast density software, they bring fewer women with non-dense breasts back for supplemental imaging. A team from Norway also found that when these scans are used together, a woman’s relative risk of a screen-detected cancer increases alongside an increase in her breast density – but, the same is not true for DM.

According to the team, led by Natalia Moshina, M.D., Ph.D., from the radiology department at the Haukeland University Hospital, there are few very reports examining the differences between DBT+SM versus DM screening performance in reference to volumetric breast density. They postulated that DBT+SM would be superior, publishing their findings in the Sept. 15 Radiology.

Related Content:​ DBT Yields Lower Recall Rates, But Not for Every Radiologist

“Our results support the previous conclusion that DBT is more responsive to volumetric density, where tumors, benign lesions, and normal structures are better visualized compared with DM,” the team wrote “Our findings might also indicate that automated software for DBT+SM provides a tool for more discriminatory evaluation of the breast cancer risk and potential risk-stratified screening practices, as women with dense breasts might be recommended to undergo additional screening techniques and more frequent screening based on the results from DBT+SM.”

To determine which screening technique works best, the team selected 28,749 women to be in the To-Be Trial, a randomized controlled trial in the BreastScreen Norway program that is investigating early performance measures with tomosynthesis. Women, who had an average age of 59, were randomly assigned to protocols – 14,380 underwent DBT+SM, and 14,369 were screened only with DM. Results from the scans were used to assign Volpara Density Grades (VDG) of 1-to-4, with 4 being the most dense, to each participant.

Based on their analysis, the team saw differences in recall rates, false-positive results, and positive predictive values and screen-detected cancers.

Positive Predictive Value and Screen-Detected Cancer: Based on their analysis, positive predictive values of recalls and biopsies were higher for DBT+SM versus DM for VDG 2, and the adjusted relative risk of screen-detected cancer increased by VDG for DBT+SM.

Although the outcomes of DBT performance in this study have been confirmed by other investigations, highlighting its ability to increase cancer detection and lower recall rates, these same results also show that DBT still has not reached the level to be effective enough for all women, other experts said. In an accompanying editorial, Ioannis Sechopoulos, Ph.D., associate professor from Radboud University Medical Center with an expertise is DBT, and Alexandra Athanasious, M.D., head of the breast imaging department at Mitera Hospital in Greece, pointed to DBT's performance differences across levels of breast density.

“While DBT can further avoid unnecessary recalls in low-density breasts, this is not the case for very dense breasts,” they pointed out. “DBT also results in a higher cancer detection rate for denser breasts, but this increase is similar to that found in DM screening.”

Still, those boosts in detection rates with both DBT and DM fall short of the expected cancer increases in those subgroups. Consequently, they added, some women will need supplemental screening even after DBT, such as dynamic contrast-enhanced breast MRI, contrast-enhanced spectral mammography, or contrast-enhanced DBT.

“These modalities could have the same or a larger impact on breast screening to solve the shortcomings of morphologic-only imaging that not event DBT can escape,” they said. 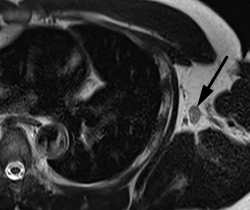