A California start-up called PrimeX General Imaging (PGI) has won a $1.6 million grant from the U.S. Army to build a prototype next-generation full-view digital mammography device. If technological hurdles are overcome, the PGI device could be the

A California start-up called PrimeX General Imaging (PGI) has won a $1.6 million grant from the U.S. Army to build a prototype next-generation full-view digital mammography device. If technological hurdles are overcome, the PGI device could be the successor to digital mammography systems that use charge-coupled device (CCD) technology, such as those under development at Trex Medical and Fischer Imaging.

Carlsbad-based PGI is building a digital slot-scanning system that should confer advantages over CCD-based technology, according to Dev Sharma, vice president of engineering and operations. PGI's system uses direct access sensing detectors, which don't require x-ray photons to be converted into light for digitization by CCDs, Sharma said. As a result, PGI's detectors may be able to offer higher resolution than CCD systems.

"This directly senses x-rays and converts them into an electrical charge, which is collected and processed," Sharma said. "With a CCD system you always lose something in the translation, going from one conversion to another."

In PGI's system, x-rays are collimated in a line that scans across the breast, and are collected by the detector. For mammography applications, PGI is using silicon detectors, which are hybridized to a silicon readout chip through indium metal bump bonding. The company could use other detector materials, such as cadmium zinc telluride, for other applications.

PGI has demonstrated resolution greater than 20 line pairs/mm and a detective quantum efficiency (DQE) greater than 80%, which means that 80% of the x-ray photons falling on the patient's breast are being used to construct an image. This compares with a DQE of about 20% for screen-film mammography, according to Sharma. The actual pixel size of PGI's system is 50 microns, and the company will be able to reduce that to 25 microns through oversampling techniques.

"You can obtain the same image as film-screen mammography at one-fifth the dose or less, or you can have significantly better image quality if you go with a higher dose," Sharma said.

The technology has its origins in work done in the defense industry, and a number of PGI employees formerly worked at aerospace firm Hughes Aircraft of El Segundo, CA. Another company, Nova R&D of Riverside, CA, is using Hughes technology to develop a digital mammography system. The Nova system uses silicon pixel x-ray detectors in a linear detector array that is mounted on a swing arm so the array can be scanned under the patient's breast. The Nova system also uses an indium bump bonding method. Nova's work is being conducted with a grant from the National Institutes of Health.

PGI's $1.6 million grant was provided by the Breast Cancer Research Program of the U.S. Army Medical Research Acquisition Activity as part of the federal government's effort to fund new technologies for breast cancer detection and treatment. The money is spread over three years and is intended to help PGI pay for clinical trials of the technology and complete work on a prototype system. PGI is the prime contractor for the grant, with other collaborators including Denver-based Fischer, the University of Arizona in Tucson, and Sharp Healthcare and the Sidney Kimmel Cancer Center of San Diego.

As part of the project, Fischer will sell PGI one of the gantries used in its SenoScan CCD-based full-view digital mammography system. PGI's detector will be fitted into the SenoScan gantry in place of Fischer's CCD detector, Sharma said.

Sharma emphasized that his company does not have a formal agreement with Fischer and that the cooperation between PGI and Fischer does not go beyond the U.S. Army project. Indeed, PGI hopes to supply its detectors to as many OEMs as possible. The company does not intend to develop and market an entire digital mammography system on its own.

"We are not going to be an OEM," Sharma said. "We should be able to provide this detector to an OEM so they can put it in their system."

PGI hopes to be able to have its detectors available to OEMs by the middle of next year. Each OEM would then be responsible for integrating the detectors into a system of its own design, and for going through the 510(k) process for its product. PGI's approach in this respect is similar to a strategy taken by dpiX, another developer of digital detectors (SCAN 3/13/96).

Fischer chairman and CEO Morgan Nields said PGI's system in theory could prove superior to CCD-based systems like SenoScan because it avoids the light-conversion process used in CCDs. Before PGI can commercialize a product, however, the company must overcome several technological hurdles, including the cost of the technology. If PGI is successful, Fischer might be interested in working with the company.

"There are a number of approaches (to digital mammography); no one has all the answers," Nields said. "If they are successful in showing improved performance at a competitive cost, we are one of the companies that are interested." 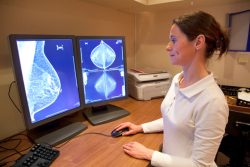