Radiologists may not order a DBT exam for African American patients, but they can participate in improving access to the screening.

African American women have significantly less access to digital breast tomosynthesis (DBT) that do their white counterparts, according a study published recently in the Journal of the American College of Radiology.

Even though DBT improves cancer detection and reduces recall rates, researchers from PennMedicine found that, based on their study population of more than 385,000 women, only 44 percent of African American women undergo DBT. Among Asian and white women, the rates of 63 percent and 61 percent, respectively.

This inequity in access presents a significant problem because African American women are more likely to be diagnosed with more aggressive forms of breast cancer at younger ages. Having easier, more consistent access to could greatly improve their outcomes.

Although radiologists and mammographers do not order DBT exams for these women, they do have a role to play in improve access and reducing the inequity, said Linda Blount, MPH, president and chief executive officer for Black Women’s Health Imperative, a non-profit organization dedicated to improving health and wellbeing for African American women and girls. 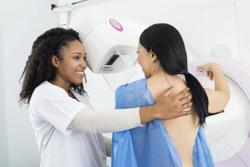