Can Increased Post-Op Surveillance Chest CT Have an Impact for Colorectal Cancer Patients?

Out of 1,600 patients who had surgery for colorectal cancer, nearly 15 percent had pulmonary metastases within 15.4 months and higher-risk patients experienced lung metastases within three months, according to new research presented at the Scientific Forum of the American College of Surgeons Clinical Congress.

Presenting the research at the Scientific Forum of the American College of Surgeons Clinical Congress in San Diego, the researchers noted they performed a retrospective review of data from 1,600 patients who had colorectal cancer. They found that 14.6 percent (233 patients) had pulmonary metastases within a median time of 15.4 months after colorectal surgery.

Using multivariate modeling, the study authors investigated clinical, pathologic, and genomic factors that were associated with a higher risk of pulmonary metastases.

“We found that patients with resectable colorectal cancer who required perioperative systemic therapy, who had an elevated lymph node ratio and a KRAS genetic mutation were at risk of developing a pulmonary metastasis within three months of their colorectal resection,” noted lead study author Nathaniel Deboever, M.D., who is a general surgery resident with the McGovern Medical School at the University of Texas Health Science Center in Houston. “This group of patients should have early post-colorectal cancer resection chest surveillance.”

Emphasizing the high incidence of lung metastases among people with colorectal cancer as well as an increasing incidence of colorectal cancer in younger adults, the study authors said there is an urgent need for evidence-based guidelines on the frequency and timing of chest CT or PET surveillance in high-risk patients.

“With this study, we sought to develop a strategy that is evidence-based to determine how frequently, at what intervals, and for how long patients at risk of developing lung metastases should undergo imaging of their chest,” added Mara Antonoff, M.D., FACS, an associate professor of thoracic and cardiovascular surgery at the University of Texas MD Anderson Cancer Center in Houston. 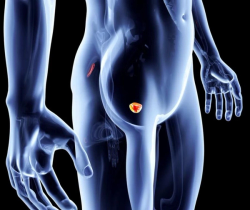 Can AI Improve the Consistency of Breast Density Assessment by Radiologists?