As I write this column, the Obama administration and the Congress are intensively discussing the elements of healthcare reform legislation.

As I write this column, the Obama administration and the Congress are intensively discussing the elements of healthcare reform legislation. My guess is that most radiologists are not looking forward to either the specific cuts targeted at imaging being considered by Congress, or cuts contained in the proposed 2010 Medicare Physician Fee Schedule rule.

Nevertheless, one aspect of the proposed new fee schedule rule, if CMS tailors it correctly, could have a dramatic and positive benefit, and could significantly reduce physician in-office self-referral.

That part of the new fee schedule proposal is the new imaging accreditation rule. Providing that CMS actually sets out clear requirements for the general supervising physician (medical director) at an accredited imaging facility and makes it clear that practices must bill using the name and national provider identification number of that same general supervising physician, this could be a major reform!

For two years, CMS worked on developing its antimarkup rules, which were crafted to take much of the profit out of self-referral and, thereby, curtail utilization of diagnostic imaging services. Sadly, those regulations have been largely ineffective. That's because anyone in the referring physician group practice could be designated as “performing” a technical component procedure that must be performed under general supervision. Unlike at independent diagnostic testing facilities (IDTFs), those physicians who performed services were held to no proficiency standards when applying the antimarkup rule.

Medicare rules for IDTFs have long required that supervising physicians demonstrate “proficiency” in the performance and interpretation of the test they supervise and for several years CMS has been making an effort to strengthen those standards.

Over the last two years, CMS made several attempts to actually increase the responsibility of the general supervising physicians in IDTFs. In its ill-fated Transmittal 187, issued in late January 2007, CMS attempted to make clear that the general supervisory physician is responsible for what CMS called “the overall operation and administration of the IDTF.” Although this language was somewhat clumsy and subsequently withdrawn, it was clear that CMS wanted to make sure that those physicians designated as supervising physicians actually were providing general supervision. The Medicare Supervision Rules define general supervision as “the physician's overall direction and control, but the physician's presence is not required during the performance of the procedure.” CMS felt that too much attention had been given to the “presence is not required” aspect of that definition, but not enough to the responsibilities for overall direction and control.

Most readers of Diagnostic Imaging are also aware that for the last three years, CMS has been strengthening its IDTF regulations found at 42 C.F.R. 410.33. Under the newly revised rules, the general supervising physician's role is considered so important that each of them is limited to supervising no more than three IDTF sites (whether fixed or mobile). Clearly, CMS has recognized that the role of the general supervising physician is vital to the quality of the imaging services provided at any given IDTF site.

The 2010 proposed fee schedule contains accreditation standards for advanced diagnostic imaging services that will be required beginning in 2012. Both the American College of Radiology and the Radiology Business Management Association have offered significant comments that, if adopted, would constitute a major step toward both ensuring quality and patient safety and curtailing many self-referrals to advanced imaging services in physician offices.

The two organizations have recommended that CMS require general supervising physicians (“medical directors”) of accredited facilities to demonstrate proficiency in the performance and interpretation of the advanced imaging services they supervise. This proficiency requirement would not apply to a physician who directly supervises contrast studies.

My view is that, although a test performed under general supervision can be supervised remotely, that is not license to allow the general supervising physician to never set foot physically in the testing facility. The medical director should regularly interact onsite with nonphysician staff and review all imaging protocols, and he or she should be responsible for all aspects of imaging operations related to quality. These supervision functions must be documented.

Both the ACR and the RBMA suggested that CMS consider limits on the number of advanced diagnostic sites that any single qualified physician might supervise as medical director or general supervising physician. That limitation could be either numeric (along the lines of the IDTF three-site restriction), or based on quality performance guidelines.

Designating the same physician as having supervisory responsibility for both accreditation purposes and billing purposes will correct one of the major deficiencies in the antimarkup rule that became effective earlier this year.

Under the current antimarkup rules, any physician who shares the practice with the billing physician group, whether proficient in the imaging service or not, can be designated as supervising the technical component of an imaging service. This lack of a proficiency requirement in the antimarkup rule has allowed many referring physician groups to designate one of their own physicians (who “shares” the practice) as the supervisor or medical director, letting the group escape antimarkup treatment altogether.

Here is an example. Take an orthopedic group that has an in-office MRI. Beginning in 2012 it will need to have that modality accredited. CMS should require the accrediting body to assure that the medical director/supervising physician has the requisite training and experience in MR services. CMS should also require that the director/supervisor document his/her regular onsite presence to carry out the supervisory duties. The orthopedic group would likely not bill “globally.”

Even if one of the orthopods is the supervising physician (assuming proficiency), and a radiologist interpreted the MR scan, the group would need two-line (itemized) billing. For a global bill to be submitted, the same physician must both supervise and interpret the scan. And, most significantly, the actual physician(s) performing the services have to be identified on the CMS 1500 claim forms. If the performing physician does not “share” the orthopods' practice, the antimarkup payment restrictions come into play.

It is imperative that the physician who fills the supervisory role for accreditation purposes also fill the same role for billing purposes. As a general rule, Medicare requires that the name of the physician who actually performed, or supervised the performance of, a physician service correspond to the physician name and provider identification number appearing on the Medicare 1500 claim form. Moreover, the CMS 1500 form is designed so that only one physician's name and provider identification number can be reported. Every CMS 1500 form submitted to the Medicare program includes a certification signed by the physician stating that the services listed on the claim were both medically necessary and “personally furnished” by the physician, or by an employee acting under his/her direction.

While many are dreading the release of the final CMS fee schedule rule for 2010-and there will likely be much bad news in the new rules-I await its publication hopefully. CMS has a real opportunity to strike a major blow against self-referral if they take the reasonable and responsible steps that are available to them.

Think outside the box and we'll clean up D.C. 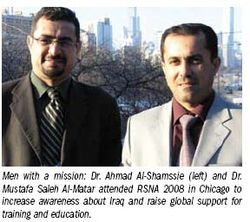 Radiologists in war-torn country reach out for global support