An analysis of available data on ionizing radiation effects suggests that 64-slice coronary CT angiography scans put young women at a greater risk of developing cancer later in life than any other patient, according to a study in the July 18 issue of the Journal of the American Medical Association.

An analysis of available data on ionizing radiation effects suggests that 64-slice coronary CT angiography scans put young women at a greater risk of developing cancer later in life than any other patient, according to a study in the July 18 issue of the Journal of the American Medical Association.

Imaging experts predict that 64-slice coronary CTA will become the standard of care for the diagnosis of coronary artery disease. Coronary artery disease remains the main killer of men and women in the U.S. and a significant burden to healthcare with related annual costs of nearly $150 billion. There are little data, however, on the associated cancer risk from 64-slice cardiac CT scans.

The JAMA study results indicate there is a wide variation in cancer risk among patient groups undergoing 64-slice coronary CTA. The modality should be used cautiously in young individuals, particularly in women, for whom alternative diagnostic tests should be considered, according to the team of investigators led by Dr. Andrew J. Einstein of the Columbia University College of Physicians and Surgeons in New York.

Einstein and colleagues estimated the lifetime risk of cancer incidence linked to radiation exposure from 64-slice CTA scans by patient age, sex, and scan protocol. They analyzed the Biological Effects of Ionizing Radiation (BEIR) VII Phase 2 report and the most current data available on radiation bioeffects using a computerized simulation model. The BEIR VII is a National Academy of Sciences-sponsored effort to study the risks of ionizing radiation exposure at doses below 100 mSv.

The investigators found that lifetime cancer risk estimates for standard cardiac scans varied from 1 in 143 for a 20-year-old woman to 1 in 3261 for an 80-year-old man. A computer-simulated ECG-pulsing protocol reduced risk estimates to 1 in 219 and 1 in 5017, respectively. The same ECG-pulsing strategy for a 60-year-old woman and a 60-year-old man would bring down the risk to 1 in 715 and 1 in 1911, respectively. The study pinpointed the lungs as the organ with the highest lifetime cancer risk across patient groups and breast cancer as the highest in younger women.

These risk estimates may not surprise the imaging community, particularly those more involved in radiation protection. Publication of this study in JAMA, however, brings the information to a wider audience and referring physicians in particular, said Cynthia McCollough, Ph.D., an associate professor of radiologic physics at Mayo Clinic in Rochester, MN.

"It has always been known, at least by anyone who follows those concepts, that the female breast is radiation-sensitive tissue and that radiation sensitivity increases with younger age. But the JAMA article would bring to a heightened awareness for ordering physicians that they need to have a good reason to justify ordering the exam," she said.

Advanced CT technologies will likely continue bringing forward new ways to save dose, McCollough said. The message from this study for the imaging community is to make sure to take advantage of those options. Physicians can use ECG-pulsing, for instance, to drop the dose during the cardiac phases they don't need to reconstruct. The risks will thus be kept proportionally low in relation to the exam's benefits. Whatever the risk estimates, if physicians can bring down radiation doses, they can also reduce the risks.

"The trend is clear that all the manufacturers and researchers keep looking for better ways to squeeze more information with fewer doses," she said.

Physicians don't see scores of young female patients coming into the ER with chest pain. But this occurrence isn't rare either. Physicians cannot ignore these symptoms, even if patients' ages and genders render it unlikely that they are having a heart attack. Because of its high negative predictive value, coronary CTA could save young women from unnecessary, more invasive, and more costly tests like catheter angiography. On the other hand, a CT scan could detect noncardiac causes of chest pain, such as aortic dissections, rib fractures, or pneumonia.

"CT is a valuable tool that the physicians need to use appropriately, not for screening in a mall parking lot," McCullough said. 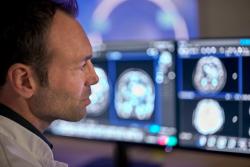