Company may have an edge over other digital x-ray developersThe stage is set for a wild scramble in the digital x-ray market following GE Medical Systems&#146; receipt of 510(k) clearance for a new digital chest x-ray system using amorphous

Company may have an edge over other digital x-ray developers

The stage is set for a wild scramble in the digital x-ray market following GE Medical Systems receipt of 510(k) clearance for a new digital chest x-ray system using amorphous silicon flat-panel detectors. While GE is not the first company to commercialize a digital chest product, it is perhaps the best positioned to capitalize on the growing interest in digital x-ray technology.

The Milwaukee company announced on Oct. 27 that it received the FDAs nod for the system, not long after filing a 510(k) application for the product in September. GE did not release a product name for the system, but most likely will do so at next months Radiological Society of North America meeting.

The digital chest unit is based on the amorphous silicon flat-panel technology that GE unveiled last year (SCAN 9/3/97). GE has partnered with EG&G Amorphous Silicon in the construction and operation of a flat-panel manufacturing facility in Santa Clara, CA. GE plans to integrate the detectors into a wide range of x-ray systems, including conventional x-ray, radiography-fluoroscopy, and mammography.

Digital x-ray systems from GE and other companies are designed to enable hospitals to operate more efficiently by eliminating their reliance on film-based equipment. Digital systems can increase exam throughput, reduce exam retake rates, lower film costs, and decrease a facilitys reliance on personnel to handle film development and transport tasks. Perhaps most important, digital technology makes it easier for radiology departments to move data into the PACS networks that are being installed at many hospitals and imaging centers.

GE targeted the chest x-ray segment as the first market for its flat-panel technology due to the markets high patient throughput needs, according to Jeff Irish, general manager of global x-ray at the company. With 60 million chest exams done each year, chest imaging has the highest throughput of any x-ray modality, and thus a digital system has the greatest potential to improve user productivity and patient satisfaction. There is also a large installed base of analog chest x-ray systems that are nearing the end of their useful lives and need to be replaced, he said.

Customers have indicated that they would like the replacement to be a high-volume product, Irish said.

GE is not the only company to recognize the potential of the digital chest x-ray market, however. Most of the companies that are commercializing new flat-panel or CCD digital x-ray systems are either targeting the chest market specifically, or have developed multipurpose systems capable of conducting chest studies. A raft of vendors have received FDA clearances for their products in the last several months, including Oldelft for its Digidelca-C system, Konica for its Regius unit, Trex Medical for its Trex 4000M system, and Sterling Diagnostic Imaging for its iiRad product line. Swissray International received clearance early this year for its AddOn-Multi-System multipurpose digital x-ray unit, while Fuji Medical Systems USA has marketed dedicated chest computed radiography systems for several years.

The variety of approaches could lead to market confusion as potential purchasers try to sort out the differences between amorphous silicon, amorphous selenium, CCD, and storage phosphor approaches. For the most part, however, the differences in technical specifications are not as important as the work-flow improvements that will derive from digital x-ray, according to Michael Cannavo, president of Image Management Consultants in Winter Springs, FL.

The different technical approaches matter to the companies marketing the products, but they dont matter at all to the market itself, he said. This is about process change; its not about technology. The differences between the technologies will become apparent as we go forward, but its the process change thats most important.

That said, GE plans to emphasize several points in differentiating its technology from those of the other companies. The vendor will highlight the fact that its amorphous-silicon panels are manufactured from a single seamless thin-film-transistor array, with none of the tiling that some companies use to scale smaller arrays into a 14 x 17 format.

GE will also make a major push to emphasize the products high detective quantum efficiency, which is a measure of its efficiency in capturing x-ray photons. The system has a DQE of 70%, which compares with about 20% for x-ray film. GE believes the DQE of its detectors is the highest rating currently available. Look for the company to emphasize the specification in its marketing effort.

GEs advantages. Depending on your point of view, GEs entry into the market could be either a boon or a bane to other companies selling digital chest x-ray technology. On the one hand, GEs participation and marketing activities could legitimize and provide awareness of a newly developing market, just as the companys entry into MRI gave that modality respectability in the 1980s. On the other hand, many prospective digital x-ray purchasers may choose the safety of GE rather than buy new technology from a less established company.

In addition to its name-brand cachet, GE will enjoy a number of other advantages over its digital x-ray brethren. The company is one of the top three PACS vendors, and incorporating digital x-ray into its product line will enable it to offer completely integrated filmless hospital installations, thus avoiding the integration problems that sometimes occur when equipment from different companies is cobbled together in a PACS network.

Finally, GE will be able to offer the new digital chest systems as part of large group buys of imaging equipment, a purchasing method that is becoming increasingly common. Such acquisitions will enable the company to overcome some of the resistance to the high price of the systems, according to Lynn Theriot, clinical analyst for radiography at MDB Information Network in Dallas.

The pricing on these systems is phenomenal, Theriot said. Anything that you can do to bring down that asking price will be helpful.

How much will the new GE digital chest systems cost? The company has cited a fairly wide price range, from $300,000 to $500,000, without specifying what components are involved at the different price points. This compares with pricing of about $400,000 for the Sterling and Swissray digital systems, and about $110,000 for a conventional chest x-ray system. GE believes that the benefits of digital x-ray will outweigh the high cost of the systems, according to Irish.

There are many benefits related to improved patient care, increased productivity, and lower costs that will help customers justify the price, he said.

GE has plans to offer mammography and radiography-fluoroscopy systems with the flat-panel detectors. The company is believed to be close to commercialization of a full-field digital mammography detector, but it declined to provide details on the regulatory status of the product. With respect to dynamic digital studies, GE will probably discuss the status of its effort at the RSNA conference. GE is also examining the feasibility of offering digital detectors as a retrofit option to its massive installed base of analog x-ray systems, according to Irish. 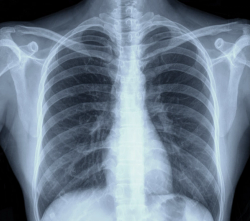