Nothing wrong with techs seeking a 'time out'

I was surprised and a bit dismayed to read Dr. Eric Trefelner's column titled “When techs ask for ‘time out,' the end may be near” in the April 2010 edition of Diagnostic Imaging.

I was surprised and a bit dismayed to read Dr. Eric Trefelner's column titled “When techs ask for ‘time out,' the end may be near” in the April 2010 edition of Diagnostic Imaging. Although I recognize that his column is intended to be humorous, I believe the attitude demonstrated is harmful in terms of patient care. The column argues that technologists and nurses questioning a procedure could lead to “unintended consequences” or a “bull's eye” on the head of radiologists.

Your readers may be interested to know that Standard One of the Radiography Clinical Performance Standards indicates that radiologic technologists are tasked to “review the patient's medical record to verify the appropriateness of a specific exam or procedure.” In addition, the Radiologic Technologist Code of Ethics states that the technologist “assesses situations; exercises care, discretion, and judgment; assumes responsibility for professional decisions; and acts in the best interests of the patient.” The code also states that radiologic technologists must “demonstrate expertise in minimizing radiation exposure to the patient, self, and other members of the healthcare team.”

To the rhetorical question posed in Dr. Trefelner's column “Who are you to question me?” I would respond, “A highly trained member of the healthcare team who has the best interests of the patient in mind.” NCRP Report No. 160, “Ionizing radiation exposure of the population of the United States” (2009), reveals that the exposure of the public to medical radiation increased considerably from 1980 to 2006. Whereas medical radiation was responsible for approximately 15% of the exposure to the public in 1980, it mushroomed to 48% in 2006. In the early 1980s the effective dose per individual was 3.6 mSv; in 2006 the exposure rose to 6.2 mSv. Much of the exposure increase is due to the increase in computed tomography, nuclear medicine, and fluoroscopy examinations. This increase in exposure, as well as some recent and tragic radiation-induced injuries, has led to increased scrutiny by the FDA and other government agencies, not the whistle-blowing of nurses and technologists.

Dr. Trefelner laments polarization in the medical community and supports “people cooperating in the best interests of the patient,” yet his column suggests that allied health personnel dare not question a procedure. The entire healthcare team, including radiologic technologists, has the right and the responsibility to act in the best interests of the patient. Performing an incorrect, redundant, or unnecessary procedure and then stating “I was just following orders” has never been an appropriate defense and divides rather than unifies the imaging community.

Finally, the use of time outs in the medical setting should not be compared with the disciplinary action that Dr. Trefelner fears from his “mommy.” Time outs ensure patient safety. Taking the time to communicate as a medical team helps avoid major mistakes involving the procedure, the site, the medications, the identity of the patient, and other key aspects of care. Providing quality patient care is a team effort. 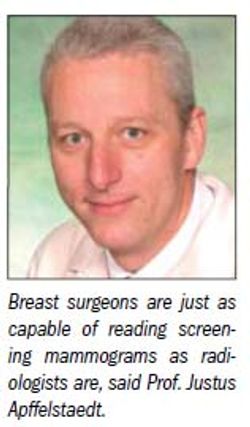