In what may be the first study to examine clinical and polysomnographic aspects of obstructive sleep apnea (OSA) and coronary microvascular disease (CMD), researchers said the frequency of OSA may be a significant factor in the development of heart disease and related complications.

People with severe obstructive sleep apnea (OSA) have more than double the risk of abnormal myocardial blood flow reserve (MFR) in comparison to those with mild or no OSA, according to new cardiac positron emission tomography (PET) research presented at the Society of Nuclear Medicine and Molecular Imaging (SNMMI) 2022 Annual Meeting.

In a study of 346 patients who had overnight polysomnographic testing and cardiac PET imaging, researchers from the Yale University School of Medicine examined OSA features with the apnea-hypopnea index (AHI) and defined abnormal MFR with a ratio of stress to resting myocardial blood flow (MBF).

The researchers found that worsening AHI led to an increased frequency of abnormal MFR. Specifically, patients with severe OSA were more than twice as likely to have abnormal MFR in comparison to patients with mild or no OSA, according to univariate and multivariate analyses of the study findings.

“Interestingly, the significant relationship between OSA severity and myocardial blood flow reserve persisted among those with normal heart PET perfusion scans and no prior history of coronary artery disease,” said Ehimen Aneni, MD, MPH, an instructor at the Yale University School of Medicine in New Haven, Connecticut. “The findings of this study may begin to explain why people with obstructive sleep apnea develop heart disease, including heart failure.”

Given the association between abnormal MFR and severe airway obstruction in people with OSA, the authors called for future studies to assess the impact of MFR in determining the risk stratification and prognosis of patients with OSA.

“The findings also suggest that the frequency of obstruction plays a major role in the pathogenesis of coronary microvascular disease (CMD) in OSA and may be a better measure of CMD likelihood than hypoxia or sleepiness symptoms alone,” noted Aneni and colleagues.

The researchers added there was no association between abnormal MFR and body mass index (BMI), hypertension, hyperlipidemia, race, or gender. 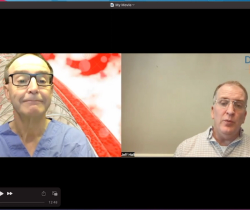 Can AI Help Differentiate Between Tumor Recurrence and Pseudoprogression on MRI in Patients with Glioblastoma?