Age bows out as factor forrecurrence in DCIS patients

Younger women with ductal carcinoma insitu have traditionally been held to have ahigher risk of recurrence than older womenwith the condition. A new study from FoxChase Cancer Center inPhiladelphia, however,challenges this view.

Younger women with ductal carcinoma in situ have traditionally been held to have a higher risk of recurrence than older women with the condition. A new study from Fox Chase Cancer Center in Philadelphia, however, challenges this view.

Dr. Aruna Turaka and colleagues examined 440 patients with DCIS. All patients received whole-breast radiotherapy, and 95% received additional radiation to the excision site. Study results showed no statistically significant difference between younger and older patients when it came to recurrences.

Findings were released at the 2008 American Society for Therapeutic Radiology and Oncology meeting. "There is a trend toward increased risk in younger women, but it was not significant enough to show that they do badly compared with the older women," Turaka told Diagnostic Imaging. 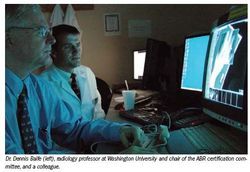