GE gets nod for digital x-ray system, adding heft to surging PACS programVendor will encounter heavy competition in chest segment GE Medical Systems seems to be getting all the breaks these days in the PACS market. The latest good news

GE Medical Systems seems to be getting all the breaks these days in the PACS market. The latest good news to come the Milwaukee vendor's way is from the Food and Drug Administration, which last month cleared a digital chest x-ray system based on GE's flat-panel amorphous silicon digital detectors. The news could give GE a crucial edge in competing for PACS contracts by enabling it to offer fully integrated filmless hospital installations.

GE announced the clearance on Oct. 27, 14 months after the company unveiled its digital detector effort (PNN 9/97). GE partnered with EG&G Amorphous Silicon in the construction of a manufacturing plant in Santa Clara, CA, to build the thin-film transistor arrays that will be used in the detectors. GE plans to employ the detectors in a wide range of x-ray systems, including conventional x-ray, radiography-fluoroscopy, and mammography.

GE is not the first company to win clearance for a digital chest x-ray system. The FDA this year has given the nod to a host of companies that have developed digitization technologies ranging from CCDs to amorphous selenium (PNN 8/98). But with its sales and marketing muscle and universal name recognition, GE is perhaps in the best position to drive market penetration of digital x-ray technology.

The digital detector clearance may also speed radiology's acceptance of PACS. Some 70% of all clinical images are x-ray exams, according to the company, and flat-panel digital detectors will enable radiology departments to quickly and easily transfer these studies into PACS networks.

GE already appears to be enjoying strong success in its PACS program (see editorial, page 1). The clearance means that GE in effect becomes a one-stop shop for PACS technology, ranging from x-ray digitization systems to PACS software, according to Michael Cannavo, president of Image Management Consultants of Winter Springs, FL. GE customers will be able to buy a PACS without worrying about any of the problems that occur when multiple components from different companies are integrated into a single PACS network.

"It certainly will make PACS more attractive to a hospital," Cannavo said. "GE has a leadership position in the healthcare arena, and a major provider like GE coming in and providing a one-stop shop will make the decision to go with GE as a PACS provider a lot easier to justify."

GE's efforts in selling digital chest systems will not be a cakewalk, however. For one thing, many radiology departments may balk at the high price tags of the new digital x-ray systems. GE has not yet released a list price for its product, but digital systems from other companies are selling in the range of $350,000 to $400,000. That's a hefty premium compared with the $110,000 price tag of a typical analog digital chest system.

GE also faces several competitors in the x-ray digitization market, particularly in the crowded digital chest x-ray segment. Sterling Diagnostic Imaging of Greenville, SC, will be a formidable foe with its Direct-Ray technology, which received 510(k) clearance in July. While Sterling lacks the name-brand recognition and equipment sales and service experience of GE, Sterling does have access to a large installed base of film users to which it can market its DirectRay and PACS products. On the downside, Sterling's DirectRay effort has been distracted by ongoing financial problems at Optical Imaging Systems of Northville, MI, the company that manufactures Sterling's amorphous selenium thin-film transistor arrays.

In addition, computed radiography vendor Fuji Medical Systems USA of Stamford, CT, isn't standing still. While most market watchers consider CR more cumbersome than the flat-panel approaches, CR is an established technology and costs considerably less than the new digital radiography systems. Indeed, most market watchers believe that CR and flat-panel approaches will co-exist for the foreseeable future as each finds its particular niche. 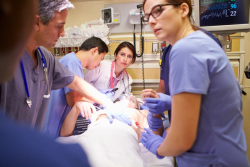