The Impertinence of Pertinent Negatives

Just how important is documenting absolutely everything?

Someone sufficiently curious and industrious could probably sleuth how/when it became a thing for radiologists-or, indeed, physicians in general-to document “pertinent negatives.” That is, diagnostic signs that are specifically not present and whose absence narrows the field of pathological possibilities.

I am not that someone. I’ve got just enough time and energy for my day-job, this little ol’ blog, and an occasional snippet of a personal life.

However, I can engage in conjecture on the matter. Docs being detectives of a sort, it makes perfect sense that they should take note of all potential clues-both positives and pertinent negatives-in seeking answers.

At some point, this went being a thing that went on in the mind of a physician (perhaps aided by notes she was jotting to keep track of things for herself) to something that he was expected/required to put in a written record for all to see.

By the time I was going through medical education and training, pertinent negatives were introduced as one of the basic facts of life. Documenting them was just something you were supposed to do.

And not just the pertinent ones: You were also supposed to list a bunch of other things, however irrelevant (or impertinent? Interesting double-meaning there) to the situation at hand.

Doing a physical exam on a patient who’s being admitted for now-resolved chest pain? You’d better document that rectal exam, intern. Reading a CT for right lower quadrant tenderness? You’re remiss if you don’t make a point of saying the spleen is normal, in its remote left upper-quadrant domain.

The thing about such “that’s just how things are done” matters is that it’s all too easy to never really think about why they’re done that way. Or, if reasons exist at all, whether they’re good ones. If they’re embedded deeply enough, daring to raise questions about them can generate some pretty strong emotional, even irrational responses. People get uncomfortable when their accepted worldview is called into question.

Writing about this in a blog rather than speaking about it in an auditorium, I can only imagine such responses from readers when I pose the question: Is there a good reason to doggedly mention every anatomical structure on an imaging-study, no matter how normal or unrelated to the clinical issue at hand?

Suppose we take two Board-certified radiologists, of comparable experience and accuracy-rate, and have them independently read the same CT. Both take the appropriate amount of time and effort in reviewing the study, and both conclude that it is entirely normal.

One of them reports it out with a highly-structured, templated report that has over a dozen different section-headings (“LIVER: Normal. SPLEEN: Normal. PANCREAS…” etc.), taking up an entire page in the process. The other rad simply says: “This CT of the abdomen and pelvis is normal.” Did either rad do a better job than the other? Note that the question is not who might have appeared to do better.

Same scenario, but now the CT has some abnormalities. Again, both rads correctly identify what’s amiss. The first rad dutifully reports the abnormalities in their appropriate sections in her templated report, with all of the other “Normal” sections still surrounding them. The clinician has to sift through it all to make sure he finds the relevant stuff.

The second rad clearly and succinctly states the abnormalities, perhaps itemized in a short list, followed by “All other imaged anatomy of the abdomen and pelvis is normal.” Again, did one of them do a better job?

A physician is, lest it need saying, a highly-trained, educated, and credentialed professional. Either such an individual is trusted to use his experience and judgment to provide healthcare, or he is not trusted and shouldn’t be allowed to do it. It should follow that, if he’s competent and trustworthy, he’ll do a good job whether or not he gives you a laundry-list of all the subcomponents of that job.

On the other hand, if a doc isn’t trustworthy or competent, how likely is it that you’ll catch him in the act of being inadequate because he failed to mention the spleen? If you’re dealing with a charlatan who knows he’d better not get caught, one of his highest priorities is going to be to mimic the more capable and conscientious folks around him. But just because he knows to mention the liver, spleen, pancreas, gallbladder, etc. doesn’t mean he’s capable of evaluating them-or that he actually tried to.

Y’know where a line-by-line recitation of expectations seems reasonable to me? When dealing with a young child to make sure he remembered and did all his chores. “Did you make your bed?” “Did you fold your laundry?” “Did you put your toys away?” “Did you do your homework?”

Even then, a kid who’s of a mind to misbehave will soon figure out how to lie and say he did something he didn’t do-much like a rad who didn’t really look at the bone-window images might get in the habit of saying that there’s no osseous pathology. Or let his pre-generated report-template say it for him.

Meanwhile, clinicians (or patients who get ahold of their reports), not knowing what goes on behind the scenes, might get misled by the forced usage of pertinent negatives.

For instance: If, under threat of non-reimbursement, rads are forced to say something about the aorta on all abdominal ultrasounds, how many of them are going to take the path of least resistance and let their report-templates list it as “normal”? And how many referrers or patients will understand that to mean “I wasn’t shown any abnormality in the small part of the aorta that could be seen” as opposed to “There is nothing wrong with this patient’s aorta”? 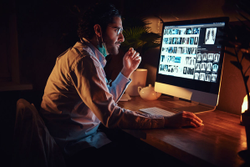