Swissray delisted from NASDAQ as digital x-ray competition heats up

NASDAQs decision came only weeks after Swissray effected a reverse stock split in an effort to bolster the price of its shares above the minimum required trading price of $1.

In addition to Swissrays failure to meet its adequate bid price, NASDAQ also cited the companys failure to file its 10-K report by an extension deadline as the reason for the delisting.

Swissray contends that in fact its stock was trading above $1 for 17 consecutive trading days before NASDAQs decision, and that the main issue in the delisting is the companys failure to file its 10-K. Swissray executives say that the reason for the 10-K delay is that this is the first time newly hired accounting firm PricewaterhouseCoopers has audited Swissrays records, and the firm is not only auditing this years numbers but all previous years as well. Swissray expected to file its report within a few days of the delisting announcement and to be back on the exchange shortly. In the meantime, Swissray has taken the necessary steps to request a review of the decision, according to Ueli Laupper, vice president of international sales and marketing.

The delisting bodes ill for Swissray, as many potential customers for the companys AddOn-Multi-System digital x-ray unit may be leery of buying expensive capital equipment from a firm that has had its stock delisted. The news is particularly challenging in light of new digital x-ray systems coming to market from major OEM competitors, such as GE Medical Systems.

GE announced on Oct. 27 that the Food and Drug Administration has cleared a digital chest x-ray system based on its amorphous silicon flat-panel detectors (see story, page 1). In addition to GEMS, Sterling Diagnostic Imaging began shipping its DirectRay system in October. Swissray also faces competition from Trex Medical, Konica, and Oldelft, as well as companies that produce storage-phosphor based digital systems. 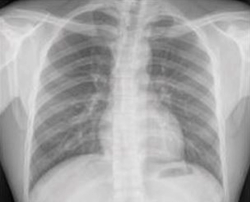